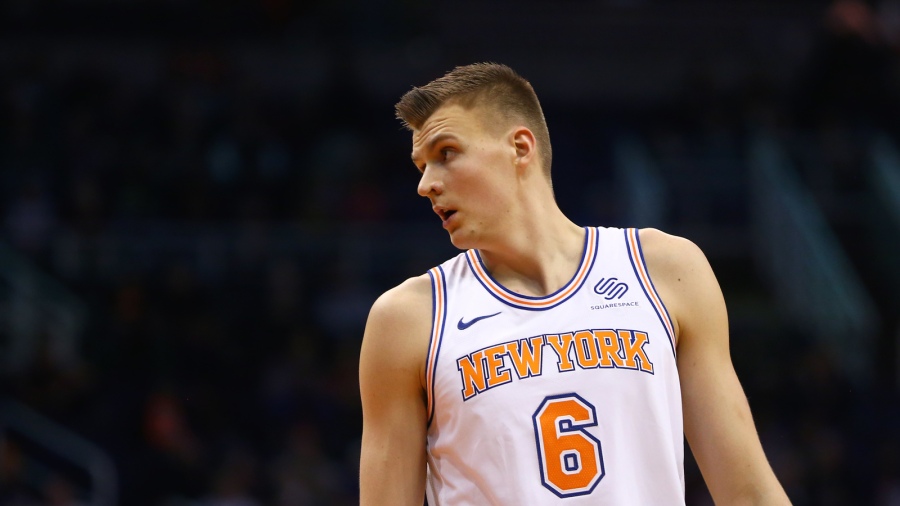 It’s the start to the NBA season, so you know what that means; I need to rank my top 100 players in the NBA just like I did last year. I began creating the rankings until I realized just how ridiculous it was that I was comparing guys like Lou Williams to guys like Clint Capela. How exactly do you fairly rank them? While they each play their role perfectly, it’s hard to determine whose role is more important to their team, so I scrapped the top 100.

With a chance of missing the majority of the season, I didn’t feel comfortable ranking Porzingis among the rest of the players. If he were 100% healthy, I probably would have ranked him at 4- in between Blake Griffin and Lamarcus Aldridge.

No brainer here. Potentially the MVP of the league this season is the 6’11 Greek Freak known as Giannis Antetokounmpo. While Basketball-Reference lists him as a power forward, he isn’t bounded to one position. At some point of his career, he has played every single role on the floor and will continue doing so as he really is the best on the Bucks at everything.

Draymond Green is the poster-child of the small ball four. Capable of shooting, playing scrappy defense, playmaking, and pushing the tempo, Green truly is irreplaceable in the Warriors system. What puts Draymond over the edge, however, is his ability to completely take an opponent out of the game by getting under his skin.

The disrespect that has been given to Blake Griffin lately is completely unwarranted. After signing a massive contract with the Clippers, they were disappointed in Blake’s production. They shipped him off to Detroit, where he continued to struggle to produce wins. What the analysts are forgetting, however, is that he had very little help on both teams while also struggling with injuries of his own. Now with a cemented spot on Detroit and a hopefully healthy upcoming season, it’s time for Blake Griffin to be unleashed. Mark my words; Blake Griffin will bounce back in a big way this season.

With all due respect to Kawhi Leonard, I’m confident the Spurs will manage to stay afloat without their former superstar, largely in part to Lamarcus Aldridge and his huge breakout season last year. After feeling disrespected in the San Antonio offense averaging under 18 points per game in his two first two seasons, Aldridge scored over 23 points per game last season. With Demar DeRozan joining forces with the former number two overall pick, look for that number to come down, yet for his stock to go up.

Aaron Gordon is one of the most interesting players in the NBA for the simple fact that he never stops getting better. Every single year, he has managed to improve in every major statistical category except rebounds one year. With no major changes to the Magic roster, I see no reason why Aaron Gordon should stop his constant growth.

James Johnson is likely the weirdest name on this list for most people to see. There is no reason as to why he shouldn’t be on your list, however. Johnson is essentially a poor man’s Draymond Green. He is one of the best wing defenders in the league (he can guard any position on the floor), a solid playmaker for his size, a capable shooter, and extremely aggressive on both sides of the floor. Watch one Miami Heat game, and you’ll notice James Johnson.

Paul Millsap had a very unfortunate season last year. While playing in only 38 games with his first season on the Nuggets, Millsap seemed to be on the outskirts of the Nuggets offense, like he didn’t really fit. That being said, his defense and leadership were still solid, and hopefully, a full 82 games helps him out.

A change of scenery was necessary for Jabari Parker, and that’s obvious. Mid-rookie season, he suffered his first ACL tear. He recovered quickly and was back for the start of the next season. Following an average sophomore season, Parker got off to a quick start in his third year. Later on that season, he would tear the same ACL and never be the same following the breakout of Giannis Antetokounmpo. Now playing in his hometown of Chicago, let’s hope Parker is able to return to form.

Jabari Parker isn’t the only star power forward on the Bulls. No, the second-year player, Lauri Markkanen who averaged over 15 points per game very closely mirrors NBA champion, Dirk Nowitzki. The Finnisher’s shooting ability is what really stands out, yet he is also a capable defender and rebounder for the Bulls’ young core.

One word- versatility. There isn’t anything Dario Saric can’t do on the offensive side of the floor- a common theme among the top power forwards. He can play big and grab rebounds and set screens, or he can play small and make plays and shoot threes. He’s truly the perfect role player for Philadelphia, as he compliments everyone perfectly.