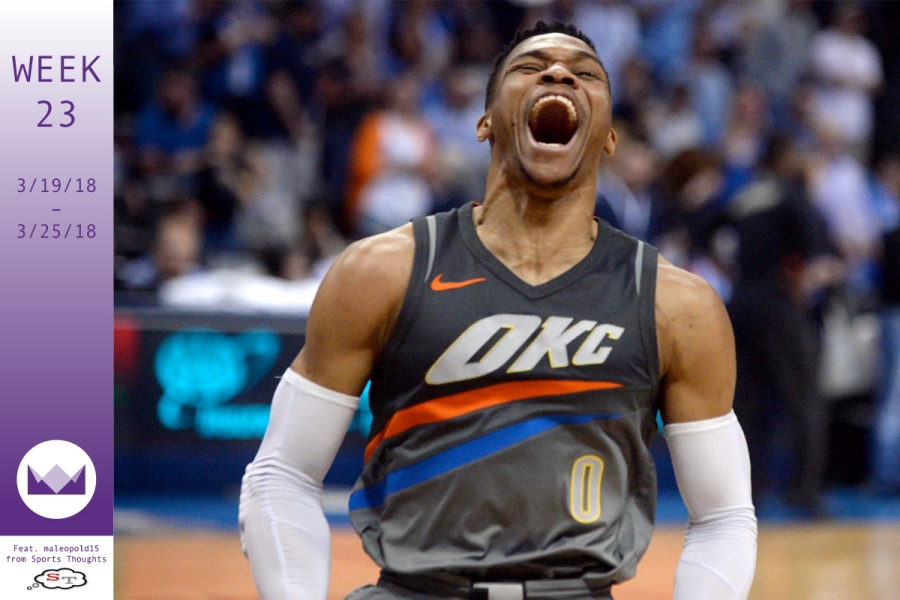 I won three out of the five statistical categories, so I won week twenty-two,

Despite the depth in the point guard position, Westbrook’ dominance has basically put him in James Harden territory as a lock for the #1 spot. As much as I like Damian Lillard right now, Westbrook is a triple-double machine that cannot be overlooked.

Me: Russell Westbrook
With five straight triple-doubles dating back to two weeks ago for Westbrook, can you really expect me to go with someone else? With the playoff racing looming in the future, Westbrook is really going to turn it on in the next couple weeks to ensure the Thunder a better seed.

The leading MVP should keep it going this week.
Me: James Harden
What he said^

I wish so badly I could go with Kevin Durant, who is leading every statistical category for the position, but I guess I have to settle for the best player on the planet. Even with the Cavs’ “struggles”, James continues to shine every time he steps on the floor.

With the regular season winding down, pressure is at an all-time high for Lebron. The best player in the world is going to have to stop these struggles eventually, and with Tyronn Lue taking some time off due to health, Lebron could have a stastical field day.

Speaking of leading every statistical category, Davis is not-so-quietly having a phenomenal season for the Pelicans. He leads all big men in points and rebounds as well as blocks, and that’s definitely good enough for me.

Me: Anthony Davis
I know. I know. I picked the exact same players at every single position as my competitor, so that makes the final spot the most important. Really though, anyone other than Anthony Davis would be ridiculous to play at power forward. Still willing the Pelicans into the playoffs, Davis is a safe 30 points and 12 rebounds every week.

There’s a sort of scramble for the 5 right now, so I’ll stick with KAT again. He’s a great low post guy who can reliably get a high double-double with points and rebounds, and that should be enough to net me another victory this week.

Joel Embiid used to be a very normal pick. As the year went on and players like Andre Drummond, Karl-Anthony Towns, and Demarcus Cousins have broken out as some of the top guys in the NBA, Embiid has taken a back seat. Lately, however, Embiid has been lighting up the stat sheets, and it all comes down to him and Karl-Anthony Towns to decide this week. Who is the best young center in the league? Talk about symbolism.