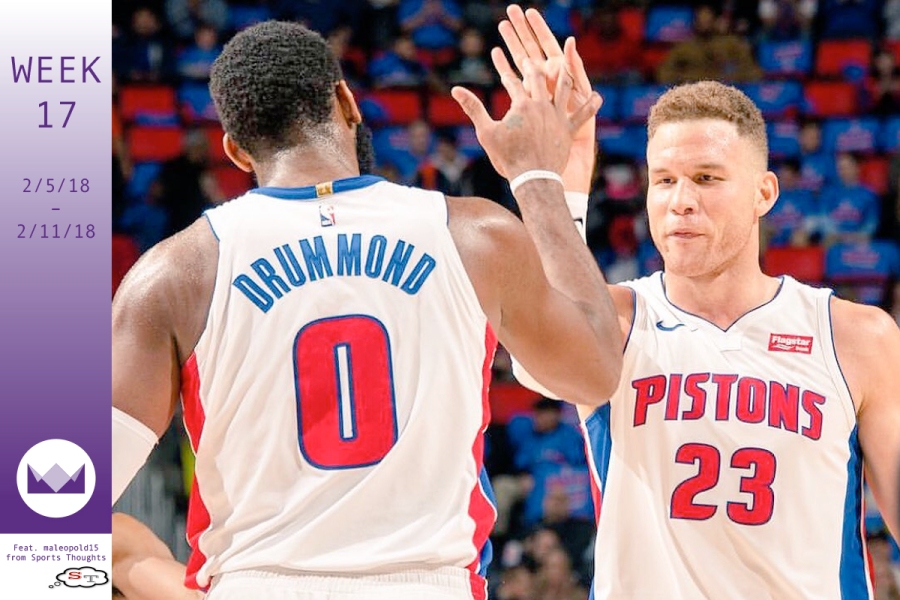 I won four out of the five statistical categories, so I won week fifteen.

As long as he stays hot, I’m going to stick with him. Westbrook is still nearly averaging a triple-double, as well as an incredible 12 apg over his past 10 games. I like the hot streak to continue as the Thunder look ahead to what promises to be a few shootouts over the next week.

Me: James Harden
While Russell Westbrook is obviously a popular pick at point guard, I had to leave him out to create a dominant two-shooting guard lineup this week. Harden’s eligibility to play both guard positions in fantasy is a luxury, and the man who scored 60 points in a triple-double performance last week obviously makes the cut for my lineup, no matter what position he’s playing.

Expect anything different? Harden and the Rockets just torched the Cavs at the Q, and they look unstoppable. I love the chemistry between Harden and Chris Paul, and I still haven’t found a reason one would go against the superstar.
Me: Donovan Mitchell
While Ben Simmons looked like an early shoe-in for rookie of the year, Donovan Mitchell is making everyone second guess themselves at least a little bit. Even with an illness keeping him out of the game yesterday, I have supreme confidence in the Jazz rookie, as he averaged just under 30 points per game in his three games prior. With an extremely easy 4-game schedule next week, Mitchell could continue his rookie of the year campaign.

As talented a he is on offense, Durant is my anchor on defense. Probably the Defensive Player of the Year at this rate, I love his production in the block and steal categories every night. He probably won’t have a problem putting up big numbers against the Thunder and Mavericks either.

Everything stated above is 100% correct; I’ve been saying that Durant is a better two-way player than Kawhi Leonard since before he even joined the Warriors. With yet another contest against the Thunder, Durant will always look to put up big numbers on Russell Westbrook, Paul George, and his former team.

Giannis Antetokoumnpo might be the smarter pick here, but I just can’t believe how easy the Pelicans’ upcoming schedule is. The Jazz, Pacers, 76ers, and Nets hardly pose much of a threat under the net, so look for Davis to have an unbelievable week if he has the stamina for it.

Me: Blake Griffin
Blake Griffin is a seamless fit next to Andre Drummond. Due to an injury to starting point guard, Reggie Jackson, Griffin has assumed the role of the lead ball carrier in Detroit. The points, rebounds, and assists will be off the charts as he begins to fit in with his new team.

My lineup is officially relying on rebounds, blocks, and steals, but I’m okay with that. I’ve snubbed Drummond all season but I can’t ignore his work ethic in the paint on both sides of the ball. Crossing my fingers that he can keep it up through the All-Star break.

Anthony Davis didn’t back down from the challenge of playing without Cousins last week, and he surely believes in the Pelicans’ playoff chances. I’m not going to lie; If it weren’t for Davis, I wouldn’t have won last week. He carries me week after week, and I see no reason to go away from him this week.